When I Decided to Go Into Rehabilitation, I Didn’t Mean For Myself 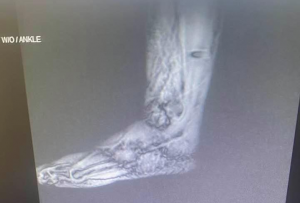 I hate to admit it but I am facing the ominous journey that we all hopefully get to face: how to deal with the fragility that comes with aging.

This question has been forced into my consciousness very recently after I ruptured my Achilles tendon doing plyometric exercises at an exercise class. The latest affront follows a decade of personal challenges associated with health and illness.

2010: I began preparing for the Marine Corp Marathon only to contract bronchitis the week of the race, forcing me to withdraw.

2011: I completed the Marine Corp Marathon. If you ask me, I’m pretty sure I won but others may want to challenge me on that.

2012: I am proud to say I completed the 100 Push-Up Challenge, which is exactly what it sounds like.

2013: I tore the labrum in my hip while working out at the gym, after which I limped around a lot over the next two years before admitting that something more drastic needed to be done.

2016: I had hip repair surgery. That’s right, I went under the knife for an injury that had occurred nearly three years earlier.

2017: That hip surgery in 2016 didn’t go so well so I had to have hip replacement surgery of the surgically repaired hip.

2018: Because bones, joints, muscles, and my respiratory system aren’t my biggest challenges, I was diagnosed with a genetic venous blood clot in my brain.

2019: I miraculously took a year off from any new physical ailments.

2020: I had surgery on my Achilles tendon, the one I tore in exercise class.

The world is full of anti-aging ideas espousing everything from typical common sense to elaborate nonsense but none offers an easy path forward. Yes, sitting in a comfortable chair and learning more about Scotch and whiskey sounds like shear pleasure and enjoyment. But odds are that will ultimately end in a pitiful slide into the abyss.

Instead, combining the latest rehabilitation techniques, which happen to be available at Capitol Rehab of Arlington, into a program that improves power, flexibility, and endurance sounds like a chance for recovery and a longer stay on this planet despite the necessary work that goes with it.

But recovering from an Anchilles injury without causing more damage comes with its own set of fears and worries. I know this is true for me, just as it is true for all our patients with injuries.  Fortunately, the physical therapy team at Capitol Rehab knows how to create a customized plan, not just for me but for anyone experiencing an injury. Way back before the pandemic, physical therapist Gina Hahn, DPT, started her own weekly classes to address the ailments of the actively aging, a community of which I apparently am a member. She is still available to show you how to prepare your body for unexpected movements.

As we age, our bodies behave in ways that we don’t recognize and come up with unexpected and unwelcome surprises.  Physical movements that previously wouldn’t have caused injuries are starting to do so. We almost can’t believe it is happening.

Some of us deny it. Others just shake their heads and furrow their brow wondering how their bodies could betray them like this. In our heads we sound like our young selves, even though we start doing “old people things” like turning the radio down to look for parking.  We maybe would have heeded the warnings from our elders about the inevitable changes had we been willing to believe it could happen to us but we thought they were just old windbags.

Now I’m the windbag. But I am not defeated! After 10 years of this, that, and the other setback, I am still a strong and vibrant person. I am diligent in the foundations of physical health. I properly hydrate, get enough sleep, and try to eat nutritiously. And with the right therapy and personal care, I know that I’ll be back on my feet — both of them — in no time. In the meantime, Drs. Beck and Hatch, my young superstars, will be covering for me for the next two weeks.

1 thought on “When I Decided to Go Into Rehabilitation, I Didn’t Mean For Myself”