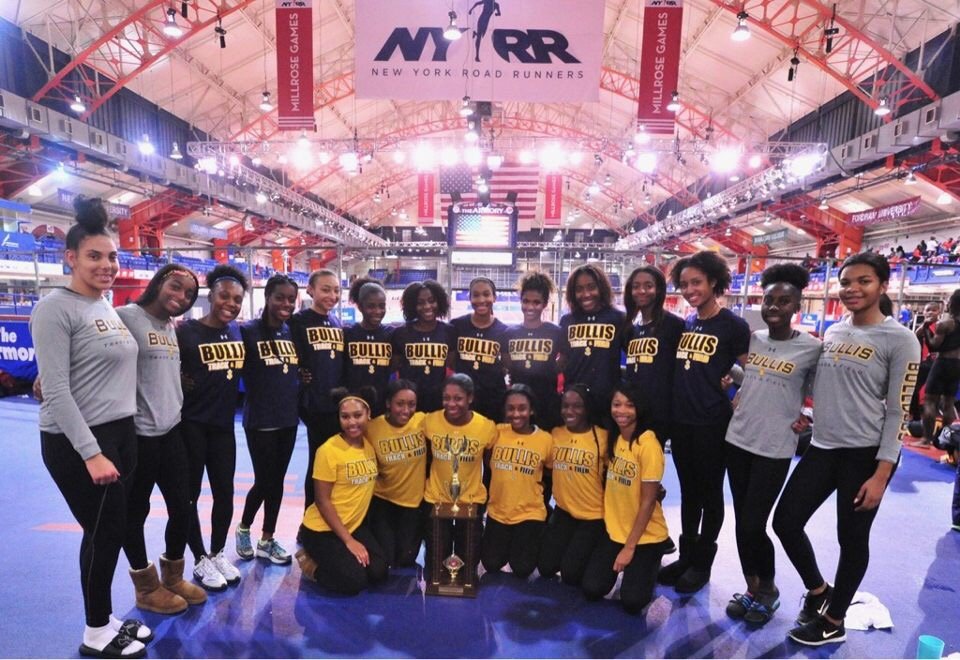 2017 Is The Year Of The Young Athlete, Starting With The Bullis Girls Track Team

To start the year off, I’m going to pay tribute to the Bullis School’s girls track team. Many of you may not be familiar with this small, independent school nestled in the affluent Washington, D.C., suburb of Potomac, Md. Even for those who are somewhat familiar, it probably would be a surprise to learn that the Bullis School is home to one of, if not, the best high school track program in the country. How good is it, you ask? Some are predicting that they have a shot to be the first American high school team in a decade to beat the storied Jamaicans when they face off in competition in Philadelphia at the end of April.

I’ve gotten to know the team and their passionate head coach, Joe Lee, and there are three things about the Bullis program that immediately stand out:

1. These young athletes are driven to excel in a traditionally non-revenue sport. Track isn’t like basketball and football where there is the potential for a huge payday (unless your name is Usain Bolt). If there is a financial pot of gold at the end of the rainbow, it most likely comes in the form of a college scholarship. The motivation for these women is simply to be the best they can be.

2. These are true student athletes. Many have already received offers and interest from collegiate academic powerhouses, including Ivy League schools.

3. Although track is considered an individual sport, Coach Lee has built this program as an extended family, and the athletes have completely bought in.

The family approach is most clearly on display in the relay events, where the Bullis girls in the 4x400m relay team and the 4x200m relay team both ran the fastest times in the United States so far this season.

To put their team dominance into perspective, in the 200m final, an event featuring athletes from all around the country, Bullis girls finished 1st, 3rd, 4th and 5th.

Look at the results from some of these Bullis track athletes and friends of Capitol Rehab during the recent Marine Corps Holiday Classic at the Armory in Manhattan and the Ocean Breeze Holiday Classic, held a day later in Staten Island.

THE FRESHMAN PHENOM: Leah Phillips — Leah has quickly jumped on the stage letting everyone know that she’s here to stay. She posted times in the 200m (24.79) and the 300m (40.16) that rank her as the No. 1 freshman in the country.

THE SENSATIONAL SENIORS: Alexis Postell and Lindsay Lewis — The two currently rank No. 1 and No. 2 in Maryland in the 55m hurdles (8.18/8.35) and form half of the hurdle relay team that is currently ranked No. 5 in the U.S.

THE TWINS: Gabby and Malana Johnson — The twins, also seniors, both ran personal bests in the 200m, with Gabby doubling down with her best time in the 55m and Malana running a top time in the 400m.

Common themes with athletes who train hard are nagging soreness, aching muscles, and recurrent injuries. The girls of the Bullis track team clearly aren’t immune to injuries. At the start of the season, we saw athletes with hip issues, lower back pain, shin splints, and foot pain. The challenge was treating injuries while designing plans that allowed athletes to resume training at an appropriate pace.  Four months into the season, it looks as if they are right on track (pun intended).

It is a privilege for me to have the opportunity to work with these young athletes and to be an active part in their development. Working with Coach Lee has been equally fulfilling. He incorporates revolutionary training techniques on the track, and has been willing to introduce our progressive approaches into their program.

2 thoughts on “2017 Is The Year Of The Young Athlete, Starting With The Bullis Girls Track Team”