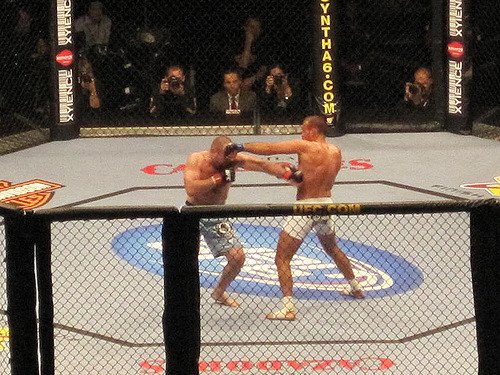 Preparing for the Fight: Putting Muscle on the Bone for MMA Athletes

Not everyone can stomach mixed martial arts, or MMA. United Fighting Championship matches are real fights. They are brutal and raw. People have even been killed or maimed while fighting. Just this past weekend, Ovince Saint Preux broke his arm while fighting in a UFC match against Jon Jones, and Jones, who was the victor in the fight, was said to have been in a wheelchair backstage after the match.

Still, the UFC, the official worldwide league representing MMA, has its appeal, and it’s not a niche market anymore. Since its inception in 1993, UFC has grown into a massive industry, with annual revenue in 2014 estimated at $522 million. Fights can be purchased for viewing in 150 countries and 22 different languages. Top fighters can earn six figures and superstars become millionaires.

The UFC is where MMA fans are watching, it’s where the money is, and it’s the organization where fighters turn when they want to apply some mad skills.

Almost every fan, whether from the streets of Sao Paulo, Brazil, or the country clubs of Potomac, Md., fantasizes about participating in MMA in some capacity. But not everyone who can fight in a street match is going to land in the UFC.

For those who want to be the best, who dream of the glory of winning matches, earning medals, and getting name recognition as an ultimate fighter, it means work. Fighters must join a federation, commit to training, and value rest, nutrition, and physical maintenance.

They need to study their opponents and multiple forms of fighting. MMA is “mixed” martial arts, which means it includes some of the techniques of American wrestling, American boxing, kickboxing, Brazilian jiu jitsu, judo, karate, and other disciplines.

Everyone who does well — or not — in the UFC, has strengths and weaknesses. Strikers, for instance, who kick and punch, have leverage in a stand-up fight. American wrestlers do well when the match lands on the mat. Most fights end up on the ground so if fighters don’t have a good grasp of ground technique, they will probably lose more fights than not.

For me, I never joined the UFC, but I trained as a fighter for years. I spent nearly all my adolescence at Tai Yim Kung Fu in Kensington, Md. I spent my childhood watching kung fu movies and developed in my head an ideal of what my life was going to look like.

My instructor started by teaching me kickboxing. But he knew that there is no broad spectrum career for one technique so I went to San Shao and kung fu, which has elements of American boxing and Thai kickboxing.

I trained for at least six hours a day without regard to anything but winning. I was driven to competition, but there was no outlet in kung fu on the magnitude of the K1 Federation, which is the elite equivalent to UFC, but for kickboxing, so I chose my natural aptitude for boxing and kickboxing. I fought professionally in the K1 Federation.

At my peak I weighed 180 lbs. and could punch through a brick wall without much effort. Being driven is often enough to push people beyond where they can naturally go, and I believe, that is the case that led me to my career-ending injury.

When I was 22, I tore an axillary nerve in my shoulder. I lost the use of my right arm for a year. I couldn’t feel the muscle. It took me more than two years to get back to doing push-ups without having my shoulder pop up, a side effect of the dislocation that occurred when I was injured.

I didn’t have surgery, but I did have a vigilant rehabilitation program that included regular e-stim to keep the nerve from dying.

I had always been passionate about being around martial artists and athletes, and I really wanted to get back into fighting, but by the time I was physically able to return to the sport, it was time to look out for other people, including my first child. Traveling in a federation seemed an unlikely means for putting food on the table.

I did, however, have a lot of time during my recuperation to think about how much I appreciated the people who helped me when I was in pain. I decided I wanted to help athletes, particularly by preventing them from injury. I started out studying kinesiology, physiology, and anatomy at University of Maryland.

Part way through the program, I decided to switch to physical therapy, where I met several athletes who really demonstrated to me the power of massage therapy. I started working closely with a therapist who helped me develop the mindset and skill set for helping athletes.

It turns out, my education in massage therapy started very early. My martial arts instructor used to show me and the other students how to pair up and work through injury, to know the difference between an injury and pain. I didn’t realize it at the time, but I was getting my education through doing what I was doing, so in a way, I feel I was built do this job.

There are two kinds of massage therapies and both are important. One usually includes some aromatic oil and a gentle rub that puts you to sleep. The massage therapy that I do is much more about getting into the muscle and breaking the scar tissue, joint mobilization, and corrective injury touch. I find the problems that you don’t know are there. There are strong preventive element to what I do, but also a strong element of healing and recovery.

What does this have to do with MMA? Well, it’s very important to be a well-rounded fighter in MMA, but that’s not the only important aspect for becoming a UFC athlete. One tip I give fighters is to fight above your weight class. You will improve if you spar with people who are better than you.

The second is to go see a massage therapist. My work deals with posture, strength, and balance. I address muscle imbalances, muscle tears, scar tissue, limited range of motion, and joint problems, the last being the most common reason people come in for massage therapy.

For athletes, I go to work on healing, the curative restoration that needs to occur in order to return to the fight each week.

I use the Graston technique, also known as scraping, which uses little stainless steel tools that look like handlebars or tongue depressors. I rub through the muscle, restraightening it. What does that mean? Well, imagine shuffling a deck of cards, but not squaring it after you shuffled. That’s what unhealthy muscle tissue looks like. By breaking up adhesions and scar tissue, and straightening the tissue, new healthy tissue growth is encouraged. The Graston technique helps to ensure that the muscle and tissue repair properly.

I also perform corrective stretching to adjust for overuse or atrophy, I do nerve work, trigger point stretching, and myofascial release. The fascia is the thin cover over muscle groups, kind of like that white skin that you tear off a raw piece of chicken. Now, imagine moving your muscles, but that thin layer not moving in tandem. That’s going to affect posture, performance, stretching, realignment of the muscles. Myofascial release doesn’t require deep muscle work, but it can be extremely effective in helping correct the trains of fascia that can cause limitations.

Being a fighter is a lifestyle, not just a weekend hobby. For those who want to demonstrate that they are well-trained, worthy sparring partners, it’s important to take all aspects of physical conditioning seriously, and that includes incorporating massage into training to prevent injuries and improve healing and recovery.