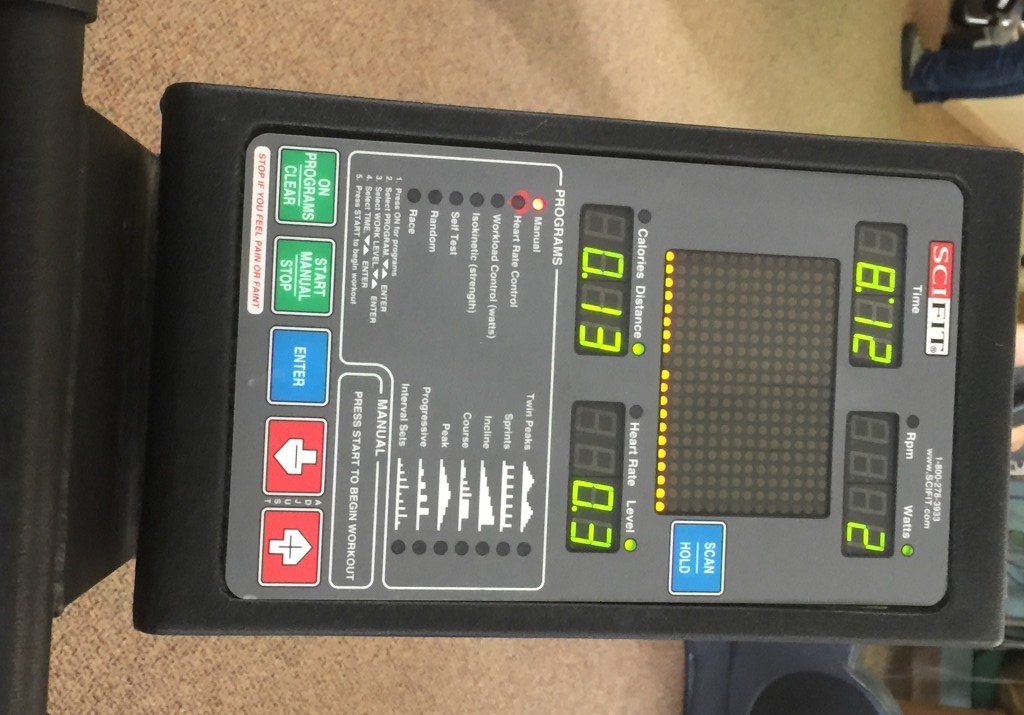 Hey, look at me go! I was able to increase the intensity to 0.3!

Post-Op Recovery: Rehab at the Hospital, an Experience for the Ages

Hey, look at me go! I was able to increase the intensity to 0.3!

Two and a half weeks post-surgery, I was cleared for my first physical therapy (PT) session with the hospital’s therapist. I was excited to begin what I knew would be a long and tedious process.

So let me preface my words by saying my hospital therapist couldn’t have been nicer and more professional. She is well-versed in surgical hip rehabilitation, and she gave me great confidence in her abilities and was thorough in explaining the process ahead.

It wasn’t her fault that she was instructed to follow the orthopedic post-op recovery orders to the letter, just as it wasn’t my fault (well, yes, it kind of was) that I was the youngest person in their rehab area by at least 35 years, so much so that the only two people close to my age looked softer than brie cheese.

“Have some pride, Mr. Jenkins, lets pick it up!” I whispered to myself as I thought of the acute pain I was feeling doing the simplest of recovery.

Is this what I’ve become?  Am I suddenly part of the Soft Brie Cheese Club?

“Five more ball tosses, Sparky. Maybe your family will respect you after this.”

I started jotting down some of my last wishes:

— If I ever have that look on my face (like the gentleman in the corner) that says, “Are you the Grim Reaper?”, it is OK to shoot me.

— If my wife has to walk around with a permanently chiseled look of mild disgust (like the lady in the waiting room) that says, “My husband never took me to Paris, and I wish he’d stop looking like he’s staring at the Grim Reaper,” again, it is OK to shoot me.

I’m aware that I’m something of a psychopath and I expected my repaired hip to be 100 percent ready to go yesterday. But I wasn’t ready for this humbling experience.

Hospital rehab is interesting. Clearly the goals are to reduce pain, and allow people to get back to a state of basic function, but when they say “basic,” they really mean “basic.”

The session began with some electric stimulation to reduce pain and swelling followed by some passive exercises by the therapist.  After the passive work, I was taken to an open exercise space where I got to ride on a stationary bike for 12 minutes at 0-level intensity.  The bike was followed by 15 minutes of compression and ice, which again felt great.

While sitting on the stationary bike, I looked around the open rehab space and saw some people doing their rehab while wearing nicely tailored suits — even while sipping on what looked like a delicious latte.  How is this possible? I was expecting some sweat, some grunting, some struggle, not light exercise with your breakfast order.

“How are you doing with the ice, Mr. Jenkins?  Can I get you anything?  Some sparking water, a piece of pie … perhaps some testosterone!”

I resisted the temptation to slit my own wrists, and compliantly scheduled two more weeks of hospital rehab. Hopefully, rehab session No. 2 would be more compelling.