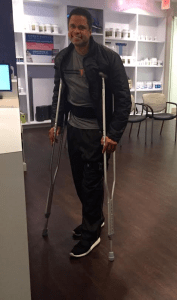 Editor’s Note: This blog is the second in a series on Dr. Bill Booker’s journey to recovery after a severe hip injury that required surgery. Dr. Booker is documenting his recovery process through his blog series: Bill Booker’s Fantastic Feats for a Faster Recovery.

I’ve had a couple of minor surgical procedures in the past, but certainly nothing like the hip procedure I recently completed. When I injured my hip three years ago, I immediately knew what I had done, but like most people I chose the path of denial.

“If I stretch and strengthen, maybe I’ll heal my torn labrum and the bony dysfunctions in the joint,” I told myself. Because mind over matter, right?

At the same time, I may not have clearly explained the severity of my injuries to my wife. (This fact will become more relevant in a moment.)

But after eventually listening to the rational side of my brain, I had an MRI, which revealed that things were far worse than I first thought.

Surgery is a fascinating thing in many ways. But specifically, the drugs used during surgery are fascinating things. I clearly remember the surgical assistants helping me to get set up on the specialized hip traction table used for hip surgery, the nurse anesthetist placing the oxygen mask over my face …

… and then I was being wheeled out to the recovery room.

And then some fairly simple post-op instructions:

“No, matter what you do, don’t screw this up. You understand?”

We may think there is gray area during recovery, but there really isn’t. Messing up a hip arthroscopy results in a hip replacement. Period. End of discussion. To me, that’s a fairly lucid and daunting pass/fail test. I have every intention of passing.

I had mentally prepared for this post-op recovery. I had consulted with several people who had successfully undergone hip surgery so I was ready for the worst.

People had shared a host of horrible “post op hip stories.” Some warnings: I may have to sleep with my feet strapped together for 2-4 weeks; I may need to take sponge baths for the first month; I may suffer severe constipation and all the lovely things that go along with that; and the worse one … I may have to use a hospital seat on the toilet.

Luckily, I avoided all of those horrible possibilities.

But I was unprepared for the other humiliations that accompany the aftermath of surgery. The first challenge would be making it up the stairs for the first time. Nurses had instructed me that I would have to sit on the steps and push myself slowly up, backwards on my butt.

Forget it. My ego won’t allow me to do several things. This was one of them.

I hopped up the steps like an Olympic triple jumper (Not actually, but I like this description better than how it may have actually looked). I immediately went for my bed where rest and recovery were to begin taking place.

It is customary for many post surgical patients to be too affected by the medications to easily navigate climbing stairs immediately after surgery. The concern is that the act of stabilizing on crutches may be too difficult. I weighed the options, and then let my overly prideful self make, what I thought, was an easy decision, get up the stairs and make sure you don’t slip.

So remember that part where I mentioned I may have downplayed the severity of my injuries to my wife? Lying in bed for the first three days was the first time I became aware of my new reality. My thigh and hip were swollen to the size of a hot air balloon; I was too weak to lift my leg one inch off the bed; and the feeling that the slightest sudden movement would result in something quite catastrophic, were sobering reminders of where I was, and how far I would have to go.

Learn more about Dr. Booker’s recovery in the next installment of Bill Booker’s Fantastic Feats for a Faster Recovery.