December 8, 2015/Sharon Kehnemui/Comments Off on Why Doctors Ask You To Rank How You Feel on a Pain Scale

Have you ever gone into the doctor’s office and the doctor asked you how would you rate your pain on a scale of 1-10? Of course, you have. It’s a standard procedure in the medical profession.

But figuring out how to answer the question is often one of the most perplexing aspects of a visit to the doctor.

But how objective is the assessment of a “7” — or any other number? What good is that number to the doctor when he or she doesn’t — and can’t — feel your pain?

Turns out, there’s a lot of literature on the accuracy and purpose of pain scales, and even the National Institutes of Health has published an article concluding that “the most commonly used measure for pain screening may have only modest accuracy for identifying patients with clinically important pain in primary care.”

The Numeric Pain Rating Scale (NPRS), as it is commonly known in the medical field, was created by the Joint Commission on Accreditation of Healthcare Organizations (JCAHO), which required hospitals and clinics to routinely assess all patients for pain in an effort to improve the quality of pain management. The tool is required by insurance companies to code a patient’s progress in their systems — in essence, to determine the legitimacy of care and whether or not to pay for services.

For obvious reasons seen below, the scale lacks clarity and really seems a bit unsophisticated. 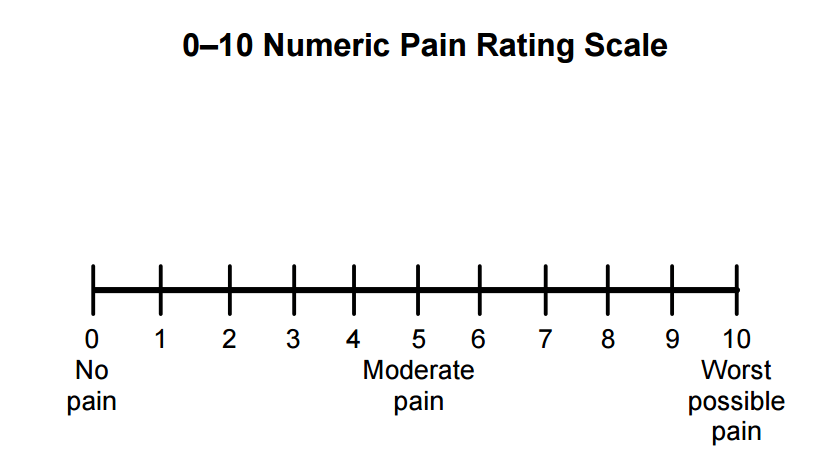 To help clarify degrees of pain, verbal cues are given to patients asking the sharpness, dullness, intensity, unpleasantness, and sensitivity level of their pain. Other comparative descriptions include mild, moderate, and severe pain.

An editorial written more than a decade ago sums up the frustration some have with this pain scale system.

The 10 is variously described as emergency room pain, the worse (sic) pain you can imagine, labor pain, suicide pain, and so on. For me the worse (sic) pain imaginable is having a large rusty, red hot, blunt knife inserted into a particularly sensitive body part and twisted compared to this pretty much all musculoskeletal pain would pale into insignificance. What now is a 3 on this scale. None of these descriptors are any more objective than the patient saying a 10 is excruciating pain that is intolerable and requires immediate and profound medication. As you can see the so-called objective scale is made subjective by describing the 10 in terms of subjective experience. Even given, for the sake of argument, that the 10 is objective, how objective is the 8? Is this excruciating, severe or moderately severe? No, this scale is not more objective than words and is likely to be less precise.”

But all this is not to say that pain scales can’t be useful.

While insurance companies are often far behind progressive, forward-thinking doctors, that doesn’t mean these doctors can’t apply objective measures — measures of success in patient care — to the scale, and report back progress to both the patient and insurers.

So for a patient who starts out with a pain of “7,” that could mean the radius of movement is very limited. A 1-point change can then be measured by the percentage increase in the radius. A “6” becomes a 15-percent change in movement for instance. Success means returning someone to a wide range of motion and high functionality.

The Rehabilitation Institute of Chicago, working with the Veterans Administration, statistically analyzed the NPRS to help doctors gauge improvements based on various injuries and illnesses. A list of quantifiable measurements included ranges for degrees of pain relief for chronic, post-operative, and healthy populations.

Using the system in this way, the scale can be a big help to patients trying to wrap their head around improvements. But the real key to success will always lie with educating the patient about what success looks like, tracking improvements, increasing comfort, and ultimately, improving patients’ ability to move pain-free. Communicating those changes with insurance companies is just the icing.