Editor’s Note: In the interest of introducing patients to Capitol Rehab staff whom they may not often get to meet or work with, we’ve launched an occasional series that puts our team members in the spotlight.

Capitol Rehab of Arlington Chiropractor Edward Beck knows a lot about his patients’ needs, but perhaps they don’t know a lot about him, other than his dedication to getting them back to their active lifestyles. 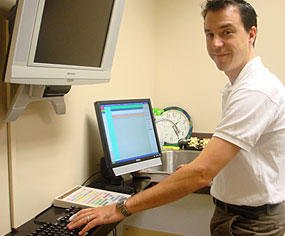 1) Where were you born? Where did you grow up?

I was raised in the western suburbs of Montreal, Quebec, Canada. I went to school there until 1999, and then moved to Iowa to go to chiropractic school.

2) Did you play sports in high school, and if so, what? Were you involved in other extracurricular activities?

I played hockey in high school and ran some track, the 5000m. I also played travel team baseball until I was 17 years old.

3) How did you end up going to Concordia U?

I went to Concordia University because they had a special program that I was interested in, Exercise Science.

4) How did you meet your wife?

My wife and I met many years before we started dating. She was the high school girlfriend of my best friend back home. We started dating in 1998, and had a long distance relationship from 1999-2001. She was living in DC getting her master’s degree from Georgetown, and I was in Iowa. She graduated and moved to Iowa. We got married in 2002 and moved to DC in 2003.

5) Why do you like working with athletes, and Ironman participants, in particular?

I  love working with athletes because they want to get better as quickly as I want them to be. They will do the work and they use their bodies like fine-tuned machines. I get to be their mechanic. Triathletes in particular are very loyal and in tune with how their bodies are feeling. They use every muscle in their bodies so they need everything to function correctly.

6) What’s so great about Active Release Technique (ART) as a tool in your chiropractic belt?

ART is the best soft-tissue technique in the world. ART has branded itself and keeps moving forward to maintain the top level of manual therapy. It gives you a plan and confidence that everything that walks in the door can be improved.

7)  You’ve received several industry professional awards. What do you think your patients or peers are recognizing when they decide to nominate you ?

I take care of lots of athletes and they regard me as part of their training. To be recognized by them is very encouraging and makes me proud to take care of them. I feel like I understand the mental game of training as well as the physical issues that come into the office.

8) What’s your favorite part about living/working in Arlington?
Arlington is a great place to live and work. I live in Fairlington in South Arlington. My kids go to school in the neighborhood and we have many friends that live close by. My wife is the president of the school’s PTA. I’m involved helping coaching my daughter’s soccer team. My son plays soccer in Arlington and is involved in the boys gymnastic team, Arlington Tigers.
9) Anything you’d like to add about the practice or the services at Capitol Rehab of Arlington?

Staying cutting edge to help our athletes get better faster is the goal. For example, laser therapy is very interesting in my opinion. It helps tissue heal faster by working at the cellular level to reduce pain and stimulate the mitochondria in the cell to produce more cells. At this point in the technology, however, it’s a prohibitively costly endeavor.

10) Anything else you want to tell us about yourself?

Little-known facts about me: I am involved in my fraternity. I am a Freemason and a Shriner.
Learn more about Dr. Edward Beck on his bio page.