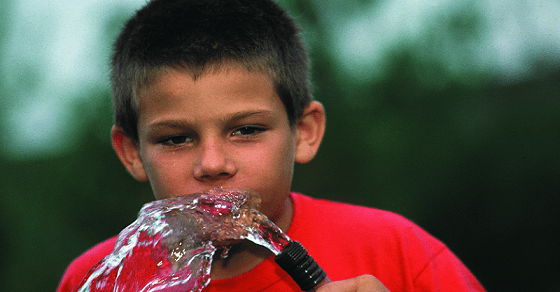 Hydration has positive benefits besides preventing dehydration. Healthy kids get their water from water.

Hydration has positive benefits besides preventing dehydration. Healthy kids get their water from water.

A recent article claiming that concerns about dehydration are vastly overblown makes such bizarre conclusions that I can only presume it was written so narrowly and literally that the author never considered the benefits of hydration.

Author Aaron E. Carroll, a pediatrician, argued recently in The New York Times that there’s no science behind the recommendation for individuals to drink eight glasses of water each day.

“Contrary to many stories you may hear, there’s no real scientific proof that, for otherwise healthy people, drinking extra water has any health benefits. …

“As people in this country live longer than ever before, and have arguably freer access to beverages than at almost any time in human history, it’s just not true that we’re all dehydrated.”

Call this misdirection if you like. I have some other thoughts.

1)  The premise of Carroll’s rant may actually be true, but it is dangerously off-base in addressing the bigger picture. His argument is that you don’t need eight glasses of water each day to be hydrated. He even goes as far as to say that you don’t need to get your water from water, and that “water is present in fruits and vegetables. It’s in juice, it’s in beer, it’s even in tea and coffee.”

I’m going to make this declaration: Considering that childhood obesity has more than doubled in the last 30 years from 8 percent to 18 percent, if your pediatrician recommends juice to your child as a form of “water,” then your pediatrician is directly part of the problem.

And good luck to the adult who thinks beer is a good source of water for the human body.

2) This author misses the boat on several levels, the most basic of which is that the water in your cells is where every chemical reaction takes place. Although you can get water from the food you eat, the best source of water is water! This is why athletes drink water, not juice or tea, to maintain hydration during competition. This is why sick patients are hydrated with water to speed up the recovery from illness. We don’t drink water in order to not feel thirsty, we drink water because that is what our bodies need — at the cellular level — for everything to work!

3) Carroll’s statement that “the human body is finely tuned to signal you to drink long before you are actually dehydrated” is both stupid and dangerous. Tell that to the athlete who crashes during the summer football workouts or the thousands of runners laying on the side of the road during marathons.

Every serious runner will tell you the exact opposite:

“Hydrate early and often, because by the time you feel thirsty, it’s already too late.”

4) The author quotes a study from 1945 as the source for what he decries as the “medical myth” that you need to drink eight glasses of water per day. Let’s stop there. Who quotes anything from 70 years ago? The research on water as it relates to performance, injury prevention, recovery illness and chronic disease and even hydration has evolved greatly since 1945.

Doctors need to advocate more water intake not less. Any suggestion to the opposite is ridiculous, and frankly, I don’t know even know what this author was trying to prove.

By the way, one of the really cool things that progressive science and medicine is doing these days is looking to specialists about health and wellness. In the area of nutrition, this unfortunately means that pediatricians are usually not at the top of the totem pole. This is not a knock against pediatricians, it’s a reality check about where their area of expertise truly lies. You want to get in great shape? Learn from a competitive body builder or figure competitor. You want to detoxify? Use a health coach. They likely have studied the science much more than the family doctor.