A blog series on the journey from short distance triathlon to Ironman 70.3

This is the first in a short series on triathlon training and competition.  My goal here is to just share my experiences with starting out in the sport of Triathlon and some of the things I have learned along the way to completing an Ironman 70.3.  As an athlete I get the first hand knowledge and experience of the sport which has been invaluable in treating these athletes in clinic.  It is my intent to share with you all of the information taken both from my own training and from the hundreds of triathletes I have treated over the years.

How I got my start in Triathlon 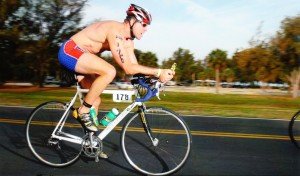 Back in 2004 I was in practice in Florida in the Tampa Bay area, one of Triathlon’s meccas.  I was working with a physician who had competed in some small local sprints and Olympic distance races and even traveled to Kona to route on a friend.  Something just didn’t sit right with me knowing I had a background in swimming and had always been active, yet had never done a Triathlon.  It was a challenge I had to take on.  So I bought a used Cannondale road bike, put on some aero bars and started to ride again for the first time in years.  I began swimming with a local Masters team and registered for my first race.  My first Triathlon was the Tarpon Springs sprint on the  third anniversary of 9-11  in 2004.

As a former competitive swimmer, I was one of the first out of the water in my wave.  My first T1 time was 10 minutes and change.   I took my sweet #$! time wiping off my feet, taking a drink of water etc.   I got passed up a bunch on the bike.  I hadn’t yet used bike shoes so I had on my running sneakers and regular pedals.  One of my left laces got tied up around the crank and I crashed  like Wile E. Coyote during the first half of the ride.  The 10 mile bike was tougher than any other bike ride  I had done before.  Mostly just because it was demoralizing getting passed so much.  My legs felt like Jello.   The run was a simple 5 K that went out from the island beach running along the causeway and then back to the finish line in the beach.  I sported headphones and a portable CD player on the run.  How can anyone run without music?  Definite USAT infraction.  Oh well.

The picture was worth it. 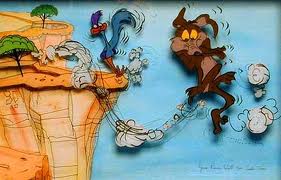 Shortly after that in 2005 I embarked on my career as an Active Release Techniques Provider.  Over the next several years I became a member of the ART Ironman Provider Network.  During the past eight years I have completed some 30 Triathlons, mostly sprint and Olympic distance.  One year I did a bandit swim at a local sprint that I was covering doing ART for the triathletes.  It was the week before St. Anthony’s and I needed to get in another open H2O swim before the race.  I have had the privilege to provide ART at several IM  events including IM Florida in Panama City and the 70.3 World Championships in Clearwater, FL.  And on top of that I have worked Kayak Water Support for several St. Anthony’s races, and four of the five IM 70.3 World Championships in Clearwater, FL. 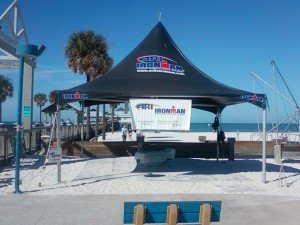 After treating literally hundreds and hundreds of triathletes, several hundred Ironman finishers, I decided to take the plunge and up
the distance to the IM 70.3  It all began with the intent to compete in the inaugural IM 70.3 at National Harbor in 2012.  Unfortunately the race was cancelled.  So I registered for the IM 70.3 Timberman in New Hamsphire.  More on that race in another blog.  In future articles I will be sharing some things I have learned along the way from several years of competing in Triathlon and treating triathletes over the years.